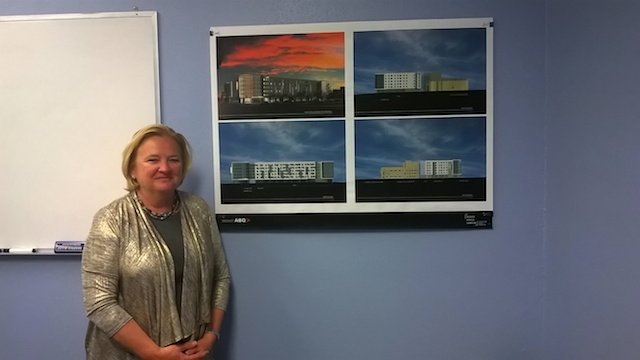 Construction crews this summer will start work on a quiet section of east downtown Albuquerque, a key step to turn the area into an innovation district.  The work will be part of the planned Innovate ABQ project.

The project entails a collaborative space for innovators, designers and entrepreneurs to work on their ideas and businesses.  Representatives of the city, state, and county governments, the University of New Mexico and the local business community are working together on the hub, which aims to attract UNM students as part of the mix.

According to the Innovate ABQ website, four phases of construction will take place over the span of 10 to 20 years.  Phase one of  construction is slated to be complete in Fall 2017. This phase includes renovating the existing First Baptist Church and six-story building on the property.  This building will house different UNM organizations such as STC.UNM and Innovation Academy. STC.UNM is the science and technology research branch of UNM, and the Innovation Academy is a school focusing on entrepreneurial and business skills that started in 2015.

The site currently is home to the Epicenter, which hosts community-based events.

“We’re doing a lot development work and planning in the meantime,” said Lisa Kuuttila, president and CEO of STC.UNM.  “For example there’s a lot of work going on to think about what else should go on the site.”

Kuuttila said STC and staff will be on the ground floor of the new building along with UNM’s Innovation Academy.  There will be space for meetings, seminars, classes, co-working and overall collaboration.  Kuuttila said the Innovate ABQ board of directors are negotiating with possible retail and commercial tenants to fill up the spaces.

Although the Innovate ABQ district focuses on startups and technology, Kuuttila said the district can benefit non-STEM and non-business students as well.

Kuuttila said STC.UNM and Innovation Academy are not the only ones who have a presence in the innovation district.

“We have entrepreneurs, investors, business community members who are interested in the economic development aspects of how the university is impacting the community,” Kuuttila said. “So I’d say it’s truly a very interesting mix of people.”

According to the ABQ Journal, the site will cost $35 million, which will be covered by three development teams. The teams are Signet Development of Ohio, Goodman Realty Group of New Mexico and the architecture firm Dekker/Perich/Sabatini which is also based in Albuquerque.

Joan Marie Yazze Gallegos works at FatPipeABQ, a co-working space which is near the site.  Gallegos plans to get involved with the Innovate ABQ site in the near future.

“Just the different communities and groups that we’re have coming in I think it’s really going to help [businesses] really boom,” Gallegos said.

“Everything is all so close together down here it’s awesome.”

‘Lunch, coffee, beer or whatever’

Kuuttila said a planned cafe in the new building is an example of the project’s  focus on retail and restaurant spaces as part of the mix. She says the retail spaces should provide local jobs.

Kuuttila said people in the district will “want an interesting mix of places that are walkable, and where they can get their lunch . . . coffee . . . beer or whatever.”

Kuuttila said moving STC to the Innovate ABQ site will enhance the group’s collaboration, as it will be located all together instead of in various parts of the city as they are now.

“I think it’s going to make our job easier quite frankly because we’re going to be not quite so isolated from the community,” Kuuttila said.

She said startups are more likely to gravitate to one area instead of looking for space in other parts of the city.

“I think we’ll start to create this density effect . . . in that innovation district between the Innovate ABQ site downtown and the university campus,” Kuuttila said. “We want that whole Central Avenue corridor stretching North and South a bit to become Albuquerque’s innovation district.”

Kuuttila said although the district focuses on students, startups and technology, veteran entrepreneurs could possibly have a chance to provide mentorship and guidance.

“Some of that is still to be worked out but we are working closely with the community,” Kuuttila said.

Kuuttila said it is an exciting time to be in Albuquerque with the growing innovation and startup scene.

“I love the entrepreneurial spirit in New Mexico and I think that’s going to be one of the major reasons that this project and really the whole entrepreneurial revolution, if you will, will be successful,” Kuuttila said.

UNM freshmen find ways to avoid going at it alone

By Bodie “Bo” Russell / NM News Port  They’ve joined The Pack, but now first-time UNM dorm residents are looking to each other — and to their advisors — in navigating strict housing guidelines amid the coronavirus pandemic this fall.  “Some of the new regulations include wearing a mask when not in your room or […]

UNM is trying to conserve energy, but advocates say it’s not enough

As part of our Curious UNM project, our reporters are seeking questions from the UNM community about the university. These questions can look at any aspect of life on campus, from historical moments to current events. This story by Bryce Dix looks at the question of “What’s UNM’s environmental impact?”   Bryce Dix / […]

By Madison Spratto / New Mexico News Port    The University of New Mexico is helping students who need mental health support during the COVID-19 pandemic by offering a variety of services online.  During times of loneliness and stress, mental health can take a hit, including for UNM students whose college experience has been transitioned […]

Congratulations to News Port! The judges for the Society of Professional Journalists’ Mark of Excellence Awards named this site its “Best Independent Online Student Publication” for 2019. Read about our exceptional regional and national honors!

Can you believe we just turned 5 years old?! If you’d like to help us get to age 10, please support The Port! You’ll help grow student reporters committed to high quality, ethical journalism for New Mexico.  Donate to the Fund for Journalism Innovation at the UNM Foundation!

How are you experiencing COVID-19? We want to hear from you.

Help us report on the coronavirus outbreak by sharing a tip or personal story. We’ll never identify you without your permission.

Check out our news partner New Mexico In Depth and their coverage of criminal justice, politics and other statewide issues.

Visit the venerable Daily Lobo, our reporting collaborator on issues that affect the University of New Mexico.