Albuquerqueans thirsty for answers about what we drink

As part of our Curious New Mexico project, we received several questions about Albuquerque’s water. News Port reporter Sophie Wickert spoke with a local water expert about where the city gets its water and how much fluoride is in the stuff everyone drinks. 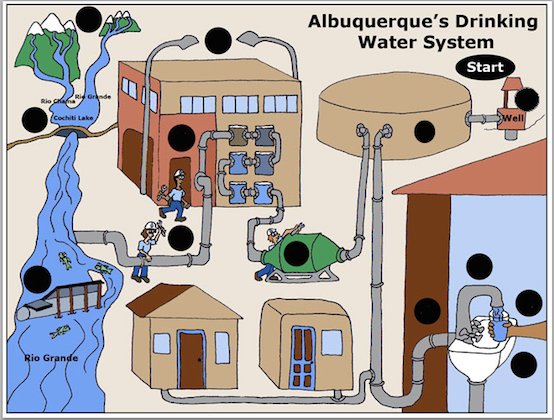 Where do we get our water from?

Albuquerque’s water comes from two main sources: groundwater and river water. Groundwater makes up about 40 percent of the community’s supply, and is collected from about 90 wells across Albuquerque.

“Groundwater requires no treatment,” said Bruce Thomson, a professor emeritus of civil engineering at the University of New Mexico who has a doctorate in environmental science and engineering, during an interview in February. “There’s a couple of exceptions. On the West Side, some of the wells have a high arsenic concentration and there’s an arsenic treatment plant on the west side. But groundwater, we chlorinate it to disinfect it and put it straight in the pipes. So often the water that you’re drinking didn’t come from very far from where the tap is.”

The second source is the San Juan Chama Project, which is a series of tributaries that form the Colorado, San Juan and Chama rivers.

“The water is not from the Rio Grande Watershed,” Thomson said, “but we take water out of some tributaries to the Colorado River up by Pagosa Springs, run it through a series of tunnels that go underneath the continental divide and then it flows down the Chama River. It enters the Rio Grande and we take the water out of the Rio Grande. But in principle, we’re only taking water molecules that are from the Colorado River Watershed. And that’s call the San Juan Chama project. We’re diverting water from three small tributaries to the San Juan River, which subsequently flows into the Colorado River. (Then we) divert it to the Chama River, and that’s our source of surface water.”

The Chama River then flows into the Rio Grande River, which runs through Albuquerque.

From there, the water is collected from a small dam and piped to the San Juan – Chama Drinking Water Treatment Plant near Paseo del Norte.

There the water undergoes a process of purification. “They remove the solids by settling, and then they pass the settled water through activated carbon. They hit it with a little bit of ozone to break apart some of the organics, and then they disinfect it by adding chlorine, and then they pump it into the distribution system… So it’s quite a robust treatment process, it’s state of the art.”

And where does our water go after we dispose of it?

Water that is used for household purposes goes down the drain and is piped to the Southside Water Reclamation Plant on Second Street South West to be purified.

“Most of the water is discharged to the river. You wouldn’t want to drink it, but it meets virtually all of the numeric criteria for drinking water. The water’s very high quality.”

The purified waste water makes up less than 10 percent of the total annual flow of the river downstream, Thomson said.

Is there fluoride in the water in New Mexico?

The answer is yes and no. Last year the Albuquerque Water Utility Authority voted against adding fluoride to the city’s water. But there is still fluoride in our water because it is naturally occurring in our water supply.

Fluoride is a tasteless mineral that is often added to drinking water and toothpaste to prevent tooth decay.

“We don’t fluoridate anymore. We used to, up until seven or eight years ago,” said Bruce Thomson, a professor emeritus of civil engineering at the University of New Mexico.

Adding the mineral is a hot topic for Albuquerque residents. “It’s quite controversial,” Thomson said. “It’s been controversial for 50 years or longer.”

According to the American Dental Association, the additive is beneficial to dental health, especially for those who are in poverty or lack access to professional care. But others argue that using fluoride should be an individual choice. Other arguments against include that it can be toxic to children and that it does not effectively treat tooth decay because it is a topical treatment that is swallowed when in water.

In an April 2014 town hall meeting in front of the Albuquerque Bernalillo County Water Utility Authority, most of the 43 public commenters were against fluoridation, including David Kennedy, the past president of the International Academy of Oral Medicine and Toxicology, who has a doctorate in oral surgery.

“So is fluoride safe for everyone?” Kennedy asked during the meeting, according to a transcript.

“I say, no, it’s not. The Agency for Toxic Substances and Disease Registry says that the data, the existing data, indicate that subsets of the population may be unusually susceptible to the toxic effects of fluoride. They include the elderly. They think that’s anybody over 50. I don’t want to use my water to dispose of hazardous waste, and I don’t think you do either.”

But even though fluoridation was discontinued after that meeting, there is still fluoride in the city’s water. About 40 percent of our water supply that comes from about 90 wells throughout Albuquerque has naturally occurring levels of fluoride that are pretty close to ADA standards.

“The American Dental Association recommends something about 1 part per million,” Thomson said. “And most of our wells have a concentration of between 0.1 and maybe 0.5 parts per million. So they’re one half to one tenth of the recommended standard.”

The rest of the 60 percent of our water supply, which comes out of the Rio Grande River north of Albuquerque, contains levels of fluoride that are lower than groundwater.

Because of this “background fluoride concentration,” Thomson said. “We’re not  jeopardizing the health of the community by not fluoridating.”

Still, the Albuquerque Bernalillo County Water Utility Authority agreed to revisit the question again, once new reports on safe fluoride levels are released by the U.S. Department of Health and Human Services and Center for Disease Control. The findings are still pending release.[/vc_column_text][/vc_column][/vc_row]