One unexpected result of the pandemic has been to limit the Traditional Navajo healing ceremonies that keep Navajo culture, tradition and language alive.

Medicine men and women usually conduct ceremonies in a sacred space, typically in their own homes or at the homes of their patients. ​​

The pandemic increased demand for their services and many debated whether or not to take the risk of being infected to help those who were.

Some, including Virginia Newman of Albuquerque, have innovated by offering healing ceremonies through phone calls, Zoom meetings and detailed at-home instructions to conduct practices and prayers on their own.

One common ceremony Newman performs, known as “Blessingway,” is problematic because it requires a large number of participants who cook, sing and dance together for several nights.

“The Blessingway ceremony is popular because it is a solution for mental and physical ailments that have been used for years,” Newman said.

Healing ceremonies are part of traditional culture that help balance out stress and anxiety, Newman said. “Sometimes a phone call doesn’t fully ground their anxiousness like a normal in-person [visit] does.”

Newman said she has been focusing on trying to complete as many Blessingway ceremonies as possible in a virtual setting. She also offers counseling, advises meditation and recommends traditional herbs.

Frank’s participation in the LGBTQ+ community has broadened his understanding of the relationship Native youth have with the traditional ceremonies and their modern identities.

“Like the times in Navajo history where we were forbidden to practice our ceremonies, the pandemic has silenced us as well,” Frank said.

“Our people today still suffer from generational trauma from those times, and it is a major concern that the absence of annual ceremonies will inch us closer to the extinction of the Navajo language and culture,” Frank said.

At the same time, it’s important to protect elders from the virus because they hold so much knowledge and affection, he said.

Some ceremonies take place at the Navajo Nation’s more than 100 chapter houses, which function as community centers and hubs for government services. The Thoreau Chapter House, about half an hour from Gallup and Grants, serves an area that has had one of the state’s highest rates of COVID-19 infection.

But the Thoreau Chapter House has not been able to host any cultural events due to the Navajo Nation’s rules against gathering in large groups, said Chapter President Valerie Arviso. 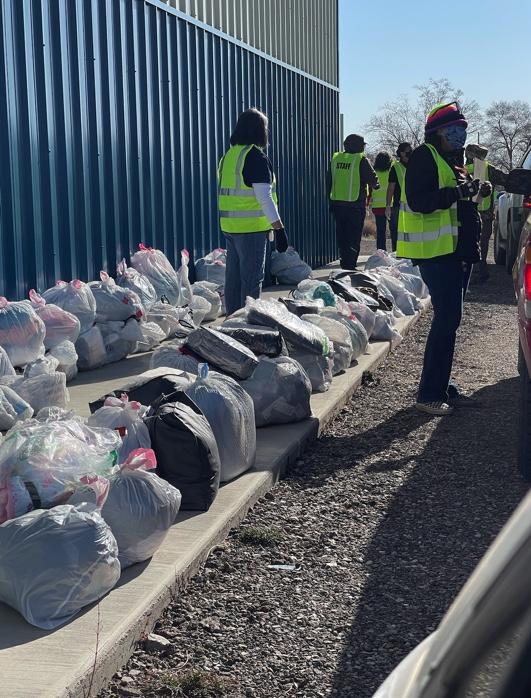 Thoreau Chapter volunteers give out bags of clothes and hygiene products at the St. Bonaventure gym. Taylor A. Gibson / NM News Port

Instead, the Chapter Houses’ main focus right now is to provide their communities with food, sanitation products and information about vaccinations, virus variants and funeral services.

President Arviso said she has been encouraging people to pray, and if the ceremony is necessary, participate with family members that are vaccinated and immediate family.

“We have to remember that our sacrifices now, not doing ceremonies, isn’t because we don’t want to, it is because we have to,” she said.

Taylor A. Gibson is a reporter for NM News Port and can be reached at nmnewsport@gmail.com