The 32nd Governor of New Mexico, Michelle Lujan Grisham, is ending her first term with plans for a second. But reelection is no guarantee, despite her leading in the polls.  Rival Republican candidate Mark Ronchetti is challenging her on the high crime rate, the high inflation rate and her severe COVID-19 restrictions.

“I think New Mexicans want an experienced, proven leader, who can make the tough decisions, who has a record to make those decisions,” Lujan Grisham said in her closing statement during a recent TV debate. 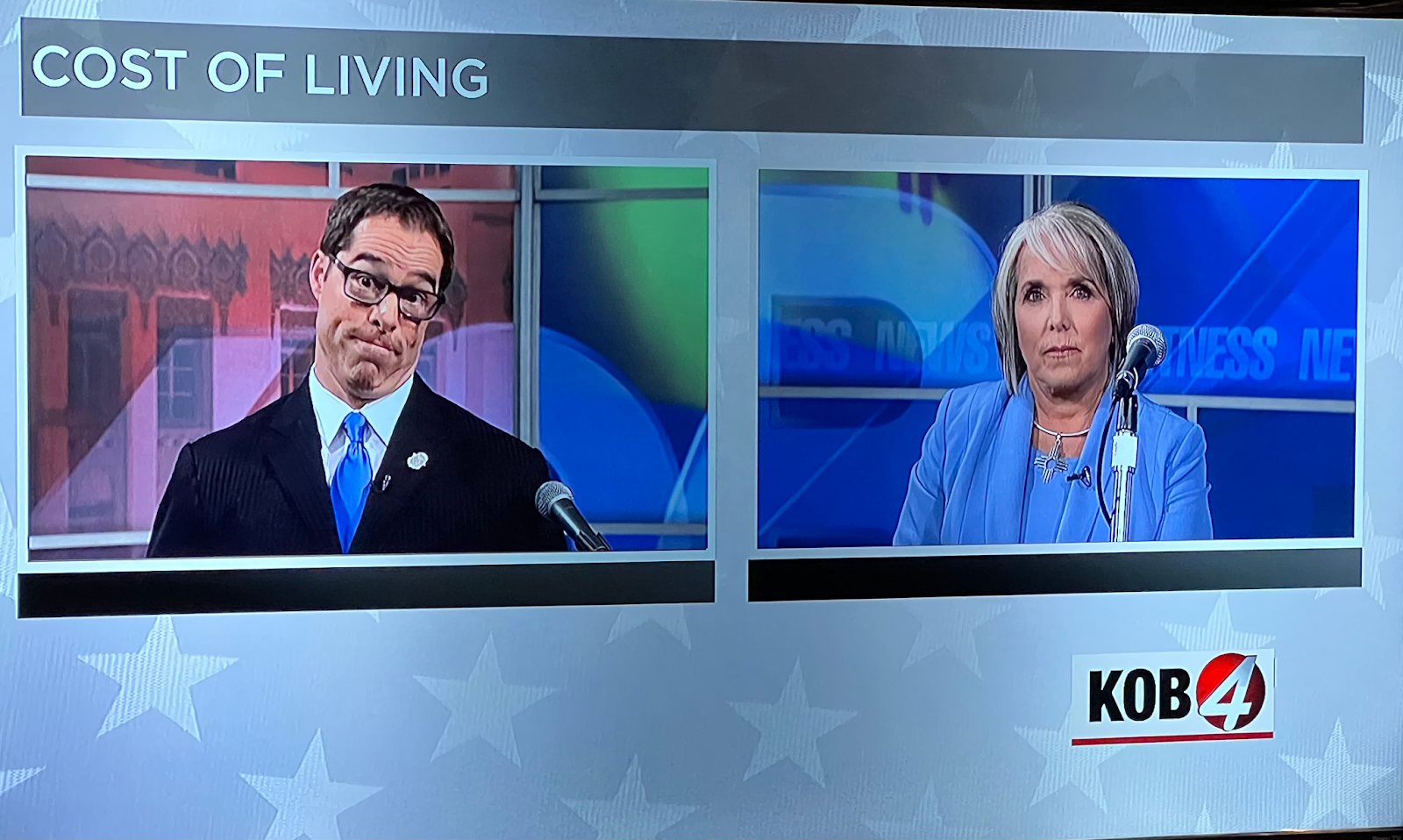 Gov. Michelle Lujan Grisham and Mark Ronchetti met each other for the first time during a Sept. 30, KOB-TV debate in which they answered questions about the cost of living, crime, and abortion. (Screen shot by Taylor Gibson / NM News Port)

Lujan Grisham hopes that her experience in congress, state and local government, and her roots as a native New Mexican will give her an advantage against her opponent.

In one of her campaign ads, her husband Manny Cordova, says, “Ella es una de nosotros” (she is one of us), to tout Lujan Grisham’s connection as a 12th-generation New Mexican.

Cordova owns an automotive shop in Santa Fe, and was raised on a small ranch in Valencia county. In the ad, he drives a pick-up truck and vouches for his wife’s authenticity.

“She lived through tough times, and was there for her daughters,” says Cordova.

Ronchetti, by contrast, was born in Vermont and moved to New Mexico for work in the 1990s.

“My family has been in New Mexico for over 400 years,” Lujan Grisham said, sharing her thoughts on the lack of Hispanic and Latino representation in the U.S. government in an ABC documentary.

Lujan Grisham said she is not surprised she is the only serving Hispanic governor in America right now, but that should not be the case.

“We must do a better job making sure that those elected, reflect the values and represent the communities they come from,” Lujan Grisham said.

Her father was a dentist who provided free dental-care to families in need, and her grandfather was the first Hispanic chief justice on the New Mexico Supreme Court.

A poll commissioned by the Albuquerque Journal found Lujan Grisham leading Ronchetti, 47% to 40% of likely voters.

The poll was conducted by Research & Polling, Inc. The company’s director of data and analytics, Brittany Poss, said the Governor’s campaign is banking on her Hispanic identity.

“I think the only thing that really surprised me was how much better the governor was doing among Hispanics, especially older Hispanics,” Poss said. “Especially since the Republican party has worked really hard in the last several years to court Hispanic voters.”

Poss said political preferences based on identity tend to persist over time.

“The older an individual is, the more their political party and issues become more important,” Poss said.

Lujan Grisham was born in Los Alamos in 1959. Her parents Buddy and Sonja Lujan raised their three children in Santa Fe.

Lujan Grisham graduated from St. Michael’s High School in 1977. She started her collegiate journey at the University of New Mexico, where she earned a bachelor’s degree in University Studies and, later, got her Juris Doctor degree from UNM law school.

Some events in her life have informed Lujan Grisham’s focus on children, families and health-related issues.

Her sister Kimberly was diagnosed with a brain tumor at the age of two and later passed away at the age of 21. Lujan Grisham says her parents struggled to pay medical bills before and after her sister’s death.

Meanwhile, her first husband Gregory Grisham died in 2004, due to a brain aneurysm. Lujan Grisham raised two daughters, Taylor and Erin, and was the caretaker of her aging mother until her death in April this year.

“As a single mom and a widow and a caregiver and a small-business owner, I related to those folks and those hardships,” Lujan Grisham said, “and that’s given me a unique perspective about how things have to change.”

A career of public service

From 1992 to 2002, Lujan Grisham worked for the New Mexico Department of Aging, and from 2002 to 2004, became its cabinet secretary working on bettering the safety and health of senior living facilities.

Her second cabinet position was at the NM Department of Health, in which she created and invested in health and wellness programs for the elderly, youth and disabled individuals.

Lujan Grisham took a break from state government in 2007, when she became a co-founder of a healthcare consultation company, Delta. The business was praised and criticized by the public. It oversaw the state’s health insurance pool and provided access to those who were denied help.

Coming back into government, Lujan Grisham was elected to the Bernalillo County Board of Commissioners where she served for two years.

In 2012, she ran and won New Mexico’s 1st Congressional District seat in the U.S. House of Representatives. The 1st District includes New Mexico’s most populous areas of Bernalillo, Torrance and parts of Sandoval, Santa Fe and Valencia counties.

During her time in Washington, she also served as chair of the Congressional Hispanic Caucus, an organization for the democratic members of the U.S. Congress that are of Hispanic and Latino descent. One area of focus was federal immigration policies.

After spending six years in Congress, Lujan Grisham announced in 2018 her candidacy for governor of New Mexico. Her campaign focused on New Mexico’s economy. She easily won the Democratic primary with 66% of the vote. In the general election, she beat Republican candidate Steve Pearce 57 to 43 percent.

Through her four-year administration, whether liked or not, Lujan Grisham was known for her strict COVID-19 management. New Mexico was ranked fifth in the U.S. for vaccines administered per capita.

During her administration, Lujan Grisham has made record investments in education, public safety and public support services. This came as she managed some of the richest state budgets in New Mexico history, largely thanks to oil and gas revenues.

In fact, the next governor will have the good fortune to manage a Fiscal Year 2024 budget predicted to grow 11%.

The overturn of Roe vs. Wade and the rising crime rates in Albuquerque were key issues in the Sept 30 gubernatorial debate.

“As long as I’m governor, a woman’s constitutional right to privacy, to make her own personal decisions about her healthcare and her family’s, will stay legal,” said Lujan Grisham on KOB-TV.

Ronchetti used the debate to portray Lujan Grisham as weak on crime.

“We can absolutely do better than this,” Ronchetti charged,  “and the fact of the matter is you say hold people accountable but you’ve done anything but. You have a parole board that has a mantra, ‘when in doubt, let them out.’”

In response, Lujan Grisham pointed to her investments in policing over her four-year term.

“We’ve given our police officers the raises they deserve, the professional development training, tools and equipment they need… and a new crime lab.”

Eyes on the prize

Also leading Ronchetti in campaign fundraising, Lujan Grisham has raised over 10 million dollars, 40% of which is coming from out-of-state donors. 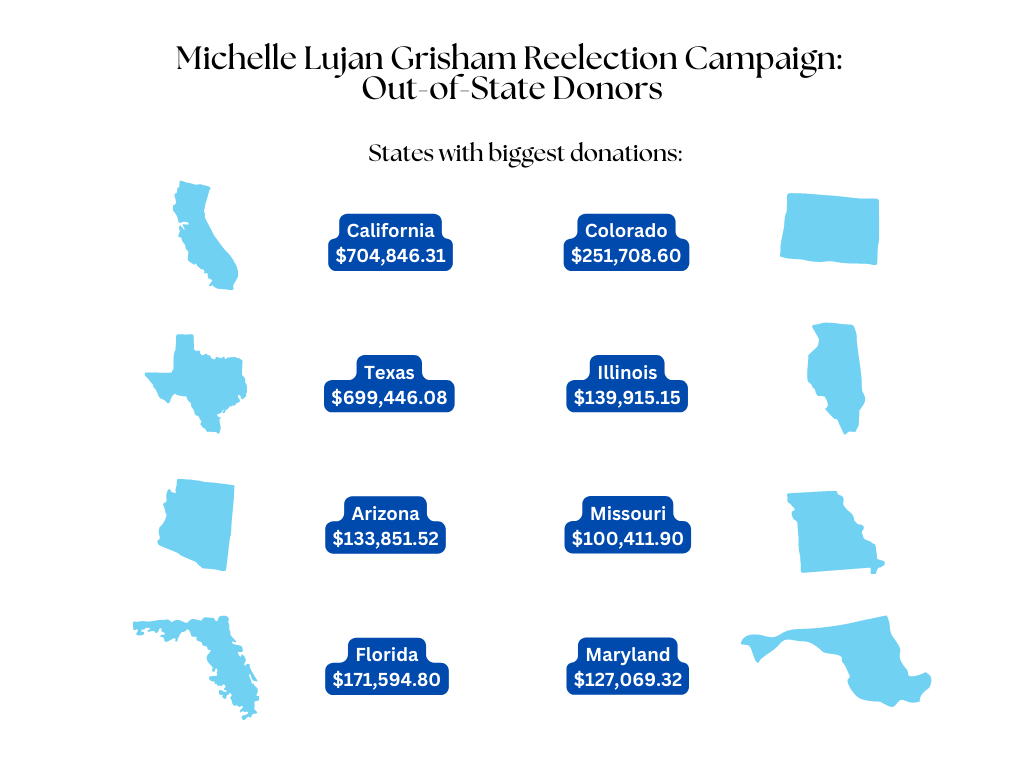 Compared to her rival, Lujan Grisham has a 23% lead in out-of-state donations.

Retired State Senator Dede Feldman says the national political parties have a stake in this race.

“The people who are contributing are the Democratic and Republican national committees. All of them outside of New Mexico want to insert national issues into this campaign.”

Feldman says the power of governors includes approving federal election results and sending slates of electors to Washington, a power that came under scrutiny during the contested 2020 presidential campaign.

If reelected, Lujan Grisham will maintain a Democratic “trifecta” of New Mexico state government, due to the Democratic majority in both the NM House of Representatives and the NM Senate.

“I love my job,” Lujan Grisham said in a recent Q & A with the Santa Fe Reporter.

Taylor Gibson is a reporter for New Mexico News Port and can be reached at nmnewsport@gmail.com.